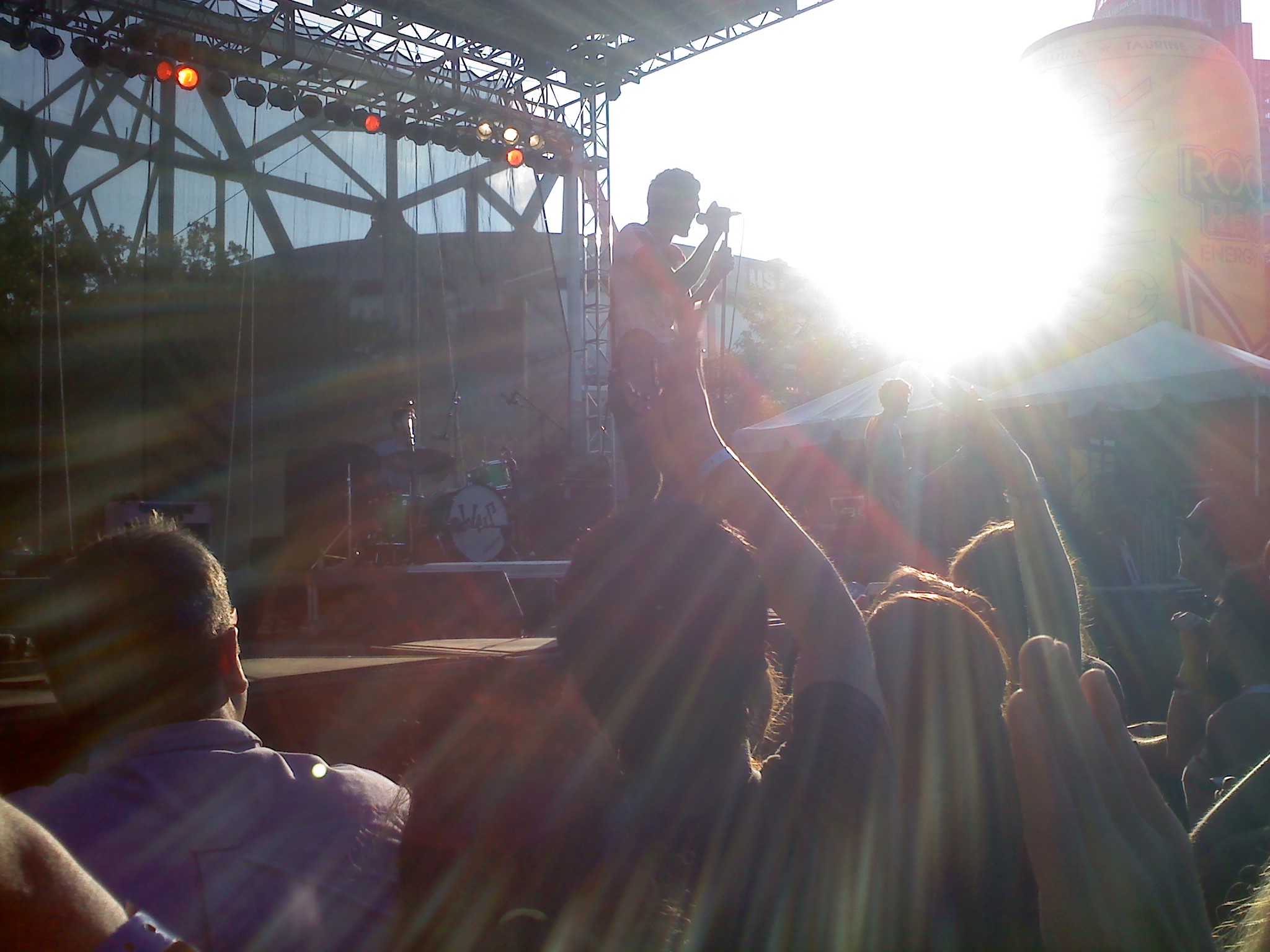 So Friday the night prior to Bunbury there had been a little party. I was the only female there though it only crossed my mind once or twice. We played beer pong and just hung out in general. It was fun. This fell into part of my recent not drinking too much success which isn’t to say I did not partake.

I had meant to leave by one o’clock but didn’t keep good track of time. A concerned Motorcycle convinced me to sober up more and leave in a few hours. I ended up partaking once more so by the time I’d sobered up It was a little after 3:00pm.

My alarm went off and I hit snooze. I’d meant for a little more sleep however the excitement of the day sprung upon me like a cup of hot coffee dropped in your lap. My blood was pumping with excitement it flowed static with kinetic energy. I couldn’t sit there a moment longer let alone sleep.

I had gotten up late, around noon I suppose, but it was morning to me. I drank coffee and my mother made me something to eat. (I like being a visitor in from out of town. You feel more appreciated.)

I got dressed wearing my popcorn shirt over a black tank top. That shirt I had found in the little girls section of Gabriel Bros but it fits like a juniors belly shirt so who cares. I wore the purple shorts that had once been part of my white rabbit Halloween costume. I wore my ratty old Geisha chucks and once fully makeuped and with contacts in I felt ready for war.

The drive to Cincinnati seems like nothing at all when you’d just driven to Lexington, double the trip, a few days prior. I will however complain that construction confused my GPS and I ended up going into Kentucky and driving around, in at least one full circle, before I found the  event location.

I walked around taking in all that was Bunbury absorbing it through each of my senses.  There were many stages, there were stands selling things, food trucks, there were beer trucks/stands, there was free Rockstar Energy and free Trojan vibrators.

It was bigger than I expected but also more within the city than I expected. Each stage was far away enough from the others that the sounds did not conflict.

So I wandered around and decided that my only real objective was to see We Are Scientists, Cake and MGMT. I had hours to kill and energy to save. I got some free Rockstar energy drinks and sat down in the grass. From here I could hear Vacationer and I think they were decent at least enjoyable for one sitting alone in the grass under a tree.

I ate some of the trail mix I had smuggled in and met an old bird who hopped around extremely close to me. He ate a worm so I imagined that this was us having lunch together. He would dose off just standing there and it made me laugh to see such an old man animal. I named him Old McHenry and I watched as he narrowly avoided being stepped upon. That old bird could be spry when needed however I never did see him fly. People stopped to ask me about the bird many thought it was hurt. He’s just old I would tell them. I was comforted to have a companion of some sort to those people even if it was a crazy old bird. 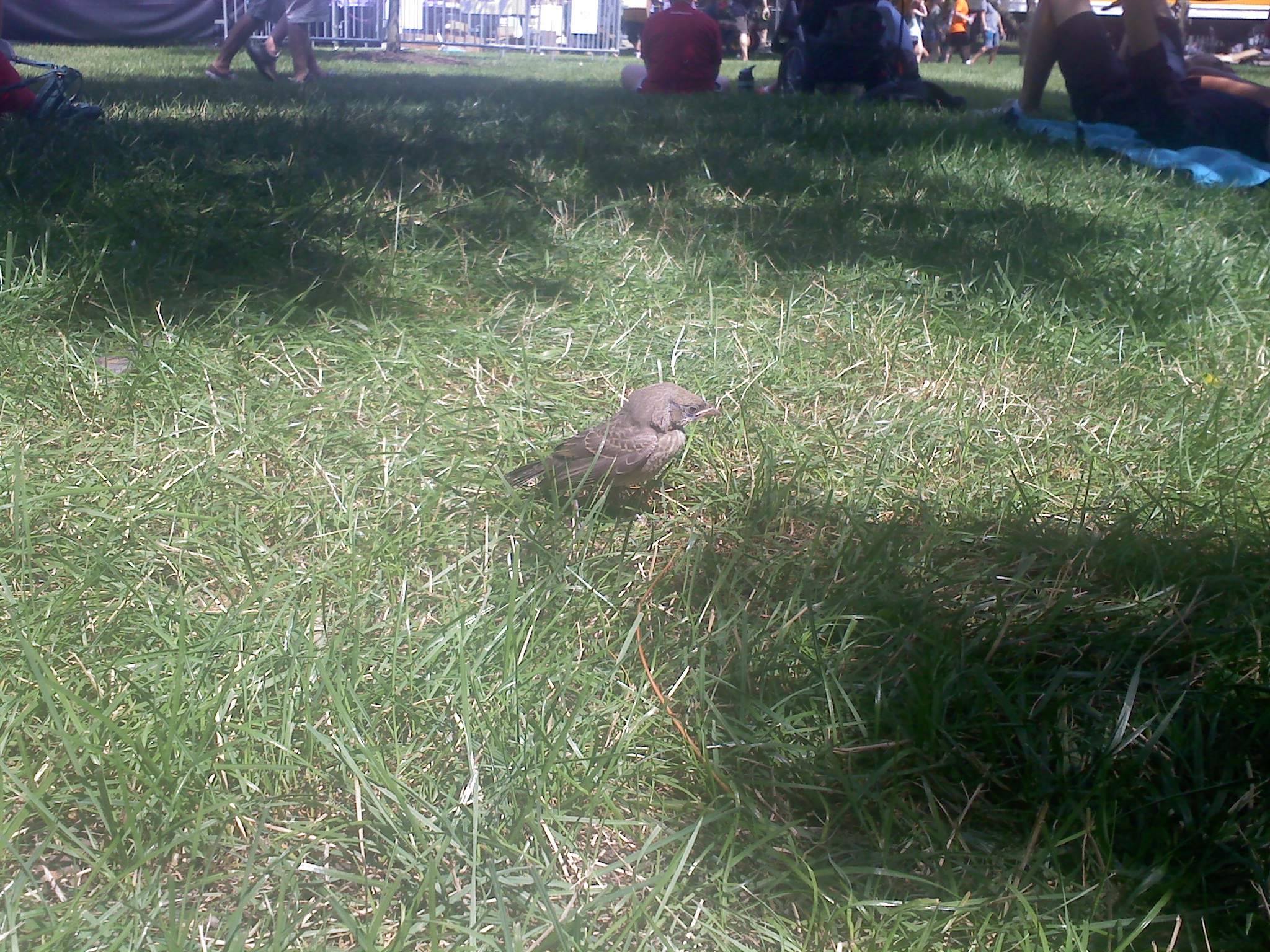 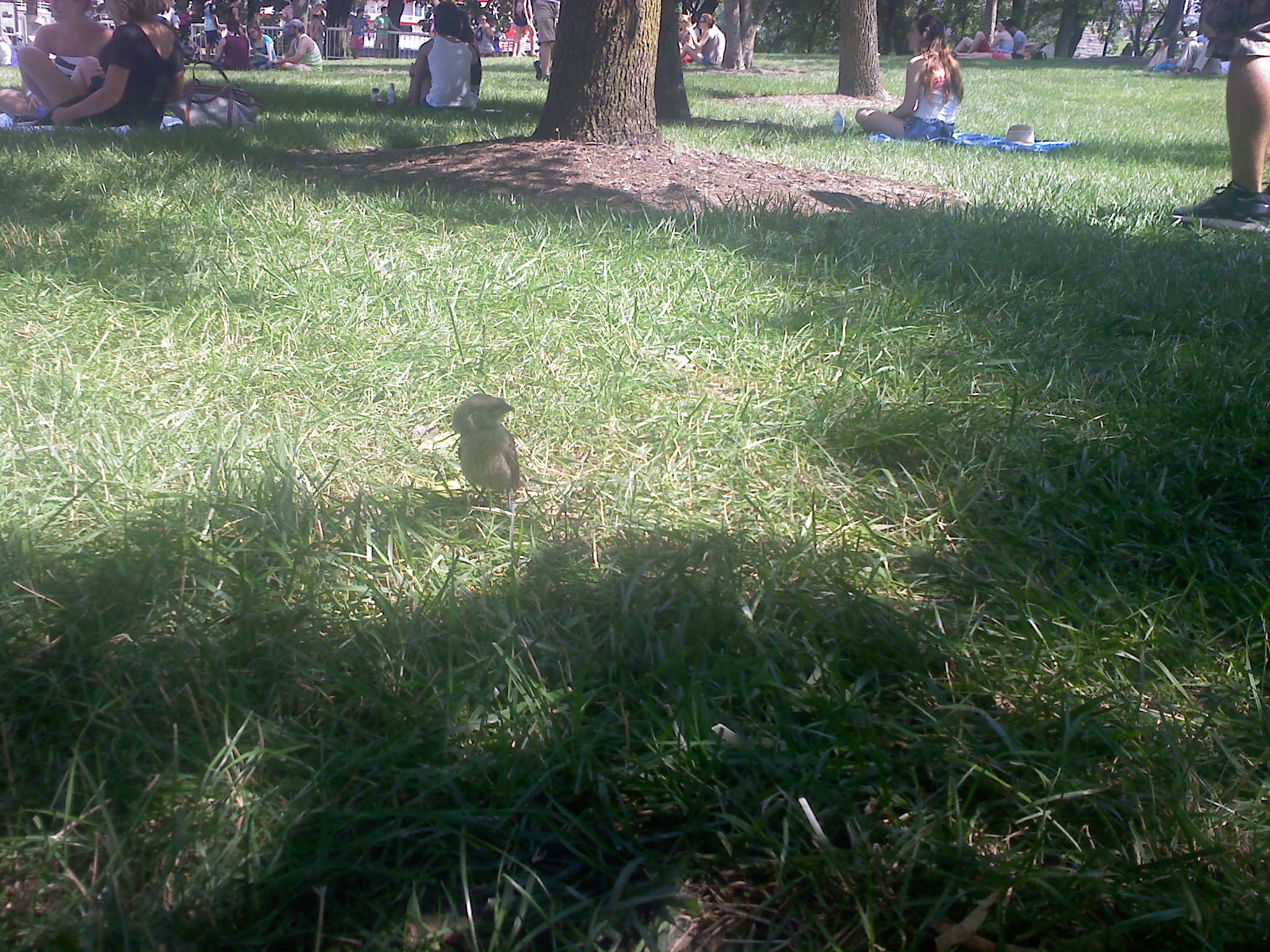 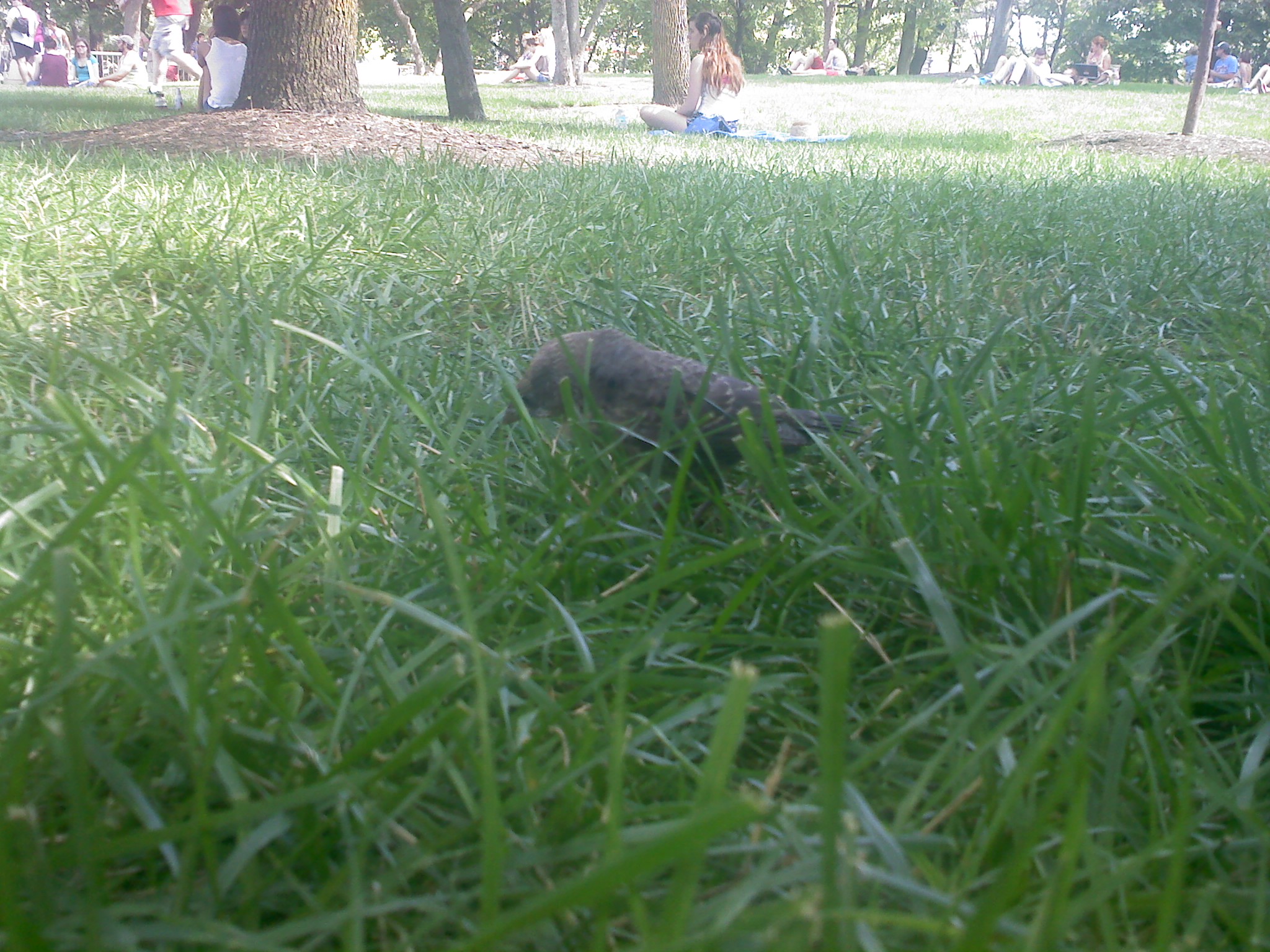 Old McHenry began to make new friends so I got up to explore more. I got some vibrators as that line had gone down (A $50 value!) and then walked it to my car. In passing some girl yelled at me “Go get it girl!”

I wandered around once more, I watched a little of Chairlifts set (which was really good), and I settled into a seat at the edge of the river. It was a lovely view and really quite nice. The gentle breeze blowing across my face, warm sun on my legs as the sound of river water mixed with the sound of live music coming at me from opposite directions. I began to not mind being here alone. I ate some more snacks; crunchy and dry, drank some more energy; tangy sweet and cool, as I watched some guy jump into the Oho river, swim a bit and then get in trouble.

We Are Scientist came on so I finally got up and squeezed in amongst the masses. I will admit that I am only familiar with their first CD but I do quite like that first CD.

I did what I always do a concerts I bounced up and down to the beat and I sang along to the lyrics I knew. The crowd went insane for Nobody Moves Nobody Gets Hurt. The sun came in like a blaze of glory to blind everyone including the band. I’d broken my sunglasses but wore them anyway letting the one arm and nose bridge keep them on my face. I got some cool pictures, I hit the ball back into the crowd, and towards the end of their set I reached quite close to the front.

Cake was next and they were to perform at the stage directly behind me. The crowd rushed immediately in that direction as soon as WAS set had ended. I found myself being one of the faster currents in this sea of human beings. It was just a little bit insane. I soon found myself stuck way back behind the sound stage. The crowd for Cake had been forming for hours and these were some dedicated fans.

They performed some classics to which I was happy and they did some really good audience participation stuff too.

I noticed some people near me squeeze forward when an opening appeared in the throng and on impulse I decided to follow along behind them and pretend I was with their group. From there I was sort of to the side of the sound stage. I stood there being on my own but then a group of three or so made a move to get closer so I tagged along behind them this time.

After that I found a very open path along the left side. I was stuck near a family for a moment and then bolted on my own when the opportunity struck. Out to the far left side much closer to the front I ran into that first group of people I had pretended to be with. I though maybe the recognized me and I thought it cool we all made it so close to the front. More people moved and I took my opportunity.

I found myself very happy to be alone for only an individual could so sneakily maneuver to the front. I was right up front there when Cake played one of my favorite songs; not sure on title I’ve always called it “Sheep go to heaven Goats go to Hell.”

By the time Cake finished I was directly behind a short girl and in front of that girl was the fence. I was just about as close as I could possibly be without having a fancy VIP ticket.

Behind us the stage where I had previously seen WAS at started up with a new band. I had about an hour before MGMT but I wasn’t about to give up this amazing spot for anything. (Oh wow extreme Deja vu… Deja Vu in writing this and Deja Vu in getting this Deja Vu)

So I was standing there waiting. At one point twittering my thumbs quite literally. Being to the left of the stage there was a little gap between the stage supports and the behind the stage area. I could see people walking around back there so I watched the people in passing hoping to catch glimpse of MGMT.

It was then that Andrew VanWyngarden walked right up to that little gap window and looked out at the crowd. He was wearing a long sleeved shirt and well… It was close enough I could tell it was him. I was in shock. I realized that the people to my right wouldn’t be able to see him he’d be out of their view. The few folks to my left who could have seen him, should I have pointed him out, were engulfed in conversation. So what was left to do but stare at him like a dumb farm animal behind a fence? I think he noticed me. Well I’m pretty sure he did. His head went from staring over my head to the band playing back there to me the one and only girl in the front row who seems to have noticed him. I really wish I had waved at him. That would have been some awesome acknowledgement. What did I do instead? I smiled shyly and started texting Swanky on my phone about how cool it was that Andrew VanWyngarden just looked at me. He disappeared and the moment had passed. All I could think was; maybe he thought I had a weird shirt on? That’s cool if he noticed my weird popcorn shirt.

MGMT’s set began after the sun had set so all my pictures are awful. That’s fine though because it’s nice to be in the moment. They started with “Alien Days” which is the first single from the new album. They played some of my favorites but really I love their music so the show all around was great for me. “Flash Delirium”, “Lady Dada’s Nightmare” and “Pieces of What” have always been particular favorites of mine. VanWyngarden put a flower in his hair at one point. He spoke to the crowd only a little. He said something about the Ohio river and said thank you in a manner that seemed humble and polite. I read once somebody said that he was an asshole but he really didn’t seem like an asshole to me.

For Electric Feel the girl from Chairlift came out on stage. She danced and sang along which was ‘friggin awesome. She has really cool hair too. I think somebody from the band said “Thank you Carolina” at the end of the song.

They did one encore and then it was over. I used my new-found crowd navigating skills to maneuver back to my car as swiftly as possible.

I made it to a party at Sullivan’s house by 1:00pm. It was fun and we hung out well past sunrise. I could give you better details of this but frankly I’m getting tired and technically that’s Sunday adventure isn’t it?